Maria Popova at Brain Pickings notes that Susan Sontag liked making lists, and that lists are “very much a currency of culture, today’s favorite attention-exploitation device in an information economy of countless listicles and innumerable numerical headlines.” The latest volume of Sontag’s collected journals, As Consciousness Is Harnessed to Flesh: Journals and Notebooks, 1964-1980, is dotted with a good number of them (some of which Popova shares), and in an entry from 1967, Sontag digs into her fascination with them:

I perceive value, I confer value, I create value, I even create — or guarantee — existence. Hence, my compulsion to make “lists.” The things (Beethoven’s music, movies, business firms) won’t exist unless I signify my interest in them by at least noting down their names.

Nothing exists unless I maintain it (by my interest, or my potential interest). This is an ultimate, mostly subliminal anxiety. Hence, I must remain always, both in principle + actively, interested in everything. Taking all of knowledge as my province.

Lists are about segregation, compartmentalization: sorting out what belongs to a category from what does not. Books you wish to read, favorite films, possible names for your children. Cities you have visited. They become useless when left open-ended. We are by nature segregators, even in our relationships: we choose particular people to pursue getting to know better, and in doing so leave others behind.

Also: it is notable that among Sontag’s list of dislikes are “being photographed” and “taking photographs.” This from a writer who called photography “the inventory of mortality,” a predatory activity reductive in its storytelling, and who wrote, “In America, the photographer is not simply the person who records the past but the one who invents it.”1

Very sad to hear of the news today that MudLuscious Press has ceased operations, and doubly sad because I was only just beginning to get to know their work.

We are officially closing. This decision wasn’t made lightly, but suffice it to say, the time has come to shut it down. We’ve had the enormous pleasure of publishing the words we loved, and we couldn’t be more grateful for our audience, our authors, and all the friends we made along the way.

Thank you all for being a part of what we did, the words we adored, and the books we spent so much of everything on. We are extremely proud to have had a small place in your literary heart.

Here’s hoping many new and profitable enterprises await these folks.

Edited to Add, 04/26/2013: One project that was left in the lurch by the closing, Gabe Durham’s Fun Camp, has already been picked up by Publishing Genius Press.

Claudia knew she could never pull of the old-fashioned kind of running away. That is, running away in the heat of anger with a knapsack on her back. She didn’t like discomfort, even picnics were untidy and inconvenient: all those insects and the sun melting the icing of the cupcakes. Therefore, she decided that her leaving home would not be just running away from somewhere but to somewhere. To a large place, a comfortable place, an indoor, place and that’s why she decided upon to Metropolitan Museum of Art in New York City. 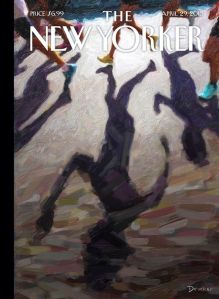 Bostonians don’t love easy things, they love hard things — blizzards, the bleachers in Fenway Park, a good brawl over a contested parking space. [And bowling with skinny pins. –N.] Two different friends texted me the identical message yesterday: They messed with the wrong city. This wasn’t a macho sentiment. It wasn’t “Bring it on” or a similarly insipid bit of posturing. The point wasn’t how we were going to mass in the coffee shops of the South End to figure out how to retaliate. Law enforcement will take care of that, thank you. No, what a Bostonian means when he or she says “They messed with the wrong city” is “You don’t think this changes anything, do you?”

Your Emotions Never Lie To You

For a while after seeing a film I would go to Roger Ebert’s web site just to see what, if anything, he had written about it. Not to see if he liked it or not, but to see if there was anything he may have noticed about it that I had missed. The fairest methods of criticism might distill authorial decisions—what the director chooses to show and chooses to withhold—and assess how it lines up with intent. But that doesn’t jibe with how we respond to stories. Some of the best artistic work is made on gut alone. The images and sequences cast a feeling that we struggle to explain later. To just say you liked or hated something is too easy to be of any value. To try to grasp why it moved you or didn’t, as Ebert (and Pauline Kael and Andrew Sarris) eloquently and painstakingly did, reminds the artist where his strengths are, which shouts into the hole are being heard at the bottom.

What I Read in March

His Last Bow, Arthur Conan Doyle. A Book-of-the-Month-Club edition that I picked up for $4.99 some time ago. The eight Sherlock Holmes stories were written after Conan Doyle had so tired of the detective that he had already once tried to hurl him over Reichenbach Falls. So they are told in a “retrospective” style, the idea that Watson is revisiting old cases from the Holmes portfolio now that the man is retired. A few of the stories I remember from other venues—“The Adventure of the Bruce-Partington Plans” from the PBS series starring Jeremy Brett and Edward Hardwicke; and others, including “The Devil’s Foot,” from the Strand Magazine reprints put out by Stanford Continuing Studies a few years ago. These stories don’t seem to feature as much sleuthing as the earlier ones in the Holmes canon.

Participants, Andrew Keating. My first read from my AWP haul, Participants is a compact collection of eight short stories from the founder of the journal Cobalt. (I had a nice conversation with the author about baseball and other things.) The protagonist of the title story is a man who makes his living participating in sleep studies and drug trials. The theme of passive existence sets the tone for the stories that follow, including a series of stories involving Mel Leopold, a veteran journalist at a dying city newspaper.

“Accept/Decline” is a particularly harrowing story mainly because of the inevitable, grossly familiar path it takes. The paper’s new owner rallies the troops on the first day, only to announce later a need to make across-the-board cutbacks in payroll and expenses.

The paid internships were cut first, but most of the students stuck it out for credit. Then it was the expense accounts and anything else the paper could easily push onto the employee. It wasn’t until day twenty-three that they first called someone into the conference room and commenced the firings.

“Davis Field” ends the collection on a sentimental note. A local baseball field is slated to be razed, and a teenage ballplayer can’t understand why his father, an ex-player himself, isn’t more upset about it.

Microtones¸ Robert Vaughan. A chapbook of flash fiction and poetry from the co-editor of Lost in Thought, and a good Fictionaut friend. Each piece, no matter how slight, includes a dagger of a line.

As the floss slides in and out I think of the guillotine. Her head on

I’d be thinking what bill did I forget to pay.

“Most people don’t like a sarcastic cancer patient actually,” I said.

Parcel, Spring/Summer 2012. This slim, handsome journal is published by the Raven Bookstore in Lawrence, Kansas. This issue includes fiction by Sarah Malone, whose work I have enjoyed at places such as fwriction : review and The Collagist. “Apples Horses Brides” is another layered work that reveals more by what it avoids, forcing the reader to piece together hints regarding its characters’ pasts.

I was struck by the prose-poem “Alice in Adolescentland,” by Alyse Knorr, which starts off like this:

In eighth-grade algebra Alice knits together equations for amount of blood spilled during an average episode of Oz and writes teen manifestos on her graphing calculator. Then it’s architecture she loves, and sketches of levitating mosque-casinos bloom on the backs of her tests and homework.

There is dynamic choreography here, between the reference to a show that alludes to another kind of wonderland, and the word choice of algebra, derived from Arabic (al-jabr, “the reduction”), seeming to set us up for the introduction of the mosque along the thread of probability and risk? It is perhaps too short a piece for me to be drawing these conclusions, but this is how it hit me.

The issue includes some interesting visual art as well. And I like the word “parcel.” True to its name, Parcel tries to bring back the element of richness and surprise to the hand-mailed print journal; apparently, if you subscribe you get a number of “limited edition broadsides and postcards,” fan-club style. When I picked up this issue at AWP it came with this neat bookmark:

Object Lessons: The Paris Review Presents the Art of the Short Story, edited by Lorin Stein and Sadie Stein. This collection is “not a greatest hits anthology,” as the editors explain; twenty “masters of the genre” (we assume that’s the short-story genre) were asked to go through the Paris Review archives and identify their personal favorite and talk a little about why it sung to them. How those “masters” were selected is not revealed, but it is interesting that the collection begins with a story by Joy Williams (“Dimmer,” selected by Daniel Alarcón) and ends with one selected by Williams (“Night Flight to Stockholm,” by Dallas Wiebe). Norman Rush is the selector and selectee in back-to-back stories. The selections vary among the well-known (Raymond Carver’s “Why Don’t You Dance?” and obscure (Craig Nova’s “Another Drunk Gambler”). Dave Eggers is owed a debt of gratitude for introducing me to another James Salter story (“Bangkok”); ditto Ben Marcus for Donald Barthelme (“Several Garlic Tales”). If one story stood out to me, it might be “Old Birds,” by Bernard Cooper, selected by Amy Hempel:

My father calls one afternoon to ask if I’ve made funeral arrangements. “For you,” I ask, “or me?”

“I know this is a morbid subject,” he says, “but your number’s gonna be up someday just like everybody else’s. You could be walking down the street, minding your own business and-Wham! Heart attack or truck, you’ll never know what hit you. It wouldn’t hurt to be prepared.”

Only then do I hear the whoosh of passing traffic. I brace myself. “Dad,” I ask, “where are you?” Silence, as my father no doubt peers around for a familiar landmark, squinting at street signs, cocking his head.

“You’d think someone would have the common decency to help me open a jar of peanut butter,” he says.

You are currently viewing the archives for April, 2013 at Neil Serven.