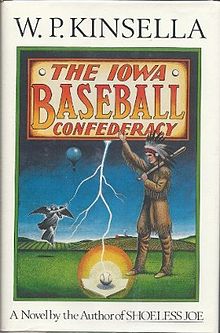 Maybe it is appropriate, in this year that W. P. Kinsella has passed, that the World Series matches up the Cleveland Indians and the Chicago Cubs, two clubs with long-standing loyalties and decades of disappointments.

It is an outcome that Kinsella himself could have written. Although he lived in British Columbia, his attentions tended toward the Chicago teams. And the clash of human will against what seems like the titanic force of fate emerges as a theme in many of the stories. At WBUR.org, Bill Littlefield of NPR’s Only a Game points to one story, “The Last Pennant Before Armageddon,” from Kinsella’s 1985 collection The Thrill of the Grass, that foretells a struggle that won’t be found in the box score:

In Kinsella’s tale, the Cubs are managed by baseball lifer Al Tiller. As Kinsella puts it, Tiller’s only desire is to “manage his baseball team in an honorable manner.”

But he’s not destined to be left alone to do that. Al Tiller begins having dreams. And he doesn’t know what to do about them. As Kinsella writes:

“He could picture himself at a news conference, pausing right in the middle of fielding questions about his pitching rotation, and his left fielder’s Achilles tendon, to say ‘Gentlemen, for the past several weeks I have been having prophetic dreams. It is my considered opinion that if the Chicago Cubs win the National League pennant, the world is going to end.'”

Littlefield points to a coincidental subplot in the story, regarding geopolitical tensions between Russia and the U.S. over Sri Lanka, and its analogous position to Syria and contemporary events. There is a feeling about this series that the outcome won’t just end a championship drought, it will alter the tilt of the earth.

Maybe the final game will resemble the one played between the 1908 Cubs and a local squad of all-stars in The Iowa Baseball Confederacy (1986), stretching for more than two thousand innings:

At the plate Jimmy Slagle takes a called strike, while the sky swirls, and the lightning, compressed, hovers like a fiery bird.

Suddenly the reprocessed lightning is pitched forth and, like a comet or a curve ball, hurtles toward the baseball field. The victim is Bob Grady, the Confederacy right fielder, who has been alternating every nine innings with Stan.

The lightning explodes, like a light bulb disintegrating. The single flash is blinding; dots dance before my eyes. The lightning is gone. Grady lies smoldering on the right-field grass.

You are currently reading Forces of Nature at Neil Serven.