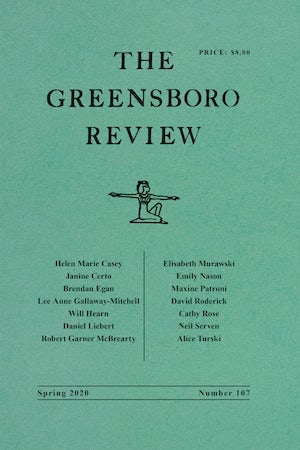 At Greenboro Review, UNC MFA candidate Chris Swensen does a deep dive into my story “Dixie Whistle,” which appeared in the Spring issue (#107). The story is not available online, but you get a pretty good idea of what it’s about from Swensen’s thoughtful reading.

I am extremely proud of the story, and received a lot of good feedback on it (in workshops and following its publication). But I have been hesitant to promote it too much given its ugly and problematic title. The very day that I received my extra contributor’s copies in the mail was the day The Dixie Chicks announced they were dropping “Dixie” from their name. That word romanticizes the confederacy and connotes segregationist policies in a way that I, a writer from the north, did not take seriously when I waggishly used it as part of Candy’s CB handle. (She thinks it up on the fly when her mother drives past a Winn-Dixie grocery store.)

The story is not about the Confederacy, nor segregation, though it is set in Georgia in 1980, the Dukes of Hazzard years, when such truculent ideas were still very much romanticized. Dixie was tossed around with a lot more abandon then, in names and brands and popular culture, and while that might make Candy’s choice of handle realistic (and fittingly and absurdly naive, as part of my intention), the writer is not excused for abandoning what he should know just because he is writing about a time in the past. To me, the name aptly pinned the clumsy ways in which we adopt false identities whenever we look for our place in a new setting–much as we do in the present day on the internet, perpetually striving to stay “on brand,” putting on personas that are meant to attract attention from strangers.

While nobody has criticized me for my use of the word yet, I am aware that to many others it is weighted with greater serious than I gave it. I hope people still read the story, and am glad that Greensboro Review took time to write about it.

You are currently reading Story in Greensboro Review at Neil Serven.