On Andy Capp at Ploughshares 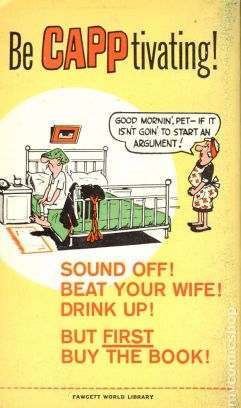 At the Ploughshares blog, I wrote about the comic-strip character Andy Capp, created by Reg Smythe. Despite a history of domestic violence, misogyny, and hostility to the role of the domestic citizen, the character continues to maintain a minor following and be used as a spokesman to sell popular line of snack foods.

Andy’s abuse of Flo was such an indelible part of his brand that it informed the marketing copy employed by Fawcett in paperback collections of the strip published in the 1960s and ‘70s. That he survives serves, to me, as an example of how our ugliest and most tired characters are granted new pathways for reinvention in spite of their inability to speak to modern sensibilities.

You are currently reading On Andy Capp at Ploughshares at Neil Serven.